In the Energy Travel offices, we love travel and we love sport. One of our favourite combinations of these two passions is supporting rugby in Italy.

We all know a little about the Italian game and the progress of the Azzurri in the six nations and at the World Cup. Below this, what does Italian rugby look like? Recent success of Italian youth teams shows promise for the future, but a strong league structure will also help promote competitive rugby and a dynamic future. With the Italian pyramid restarting last weekend, we took a deeper dive to find out more about:

Italy was first introduced to modern rugby in the early 1900s, supposedly thanks to a combination of Italian workers bringing it back from France as well as French students bringing it with them whilst studying in Turin and Milan. The first demonstration game took place in 1910 and rugby has remained a dominant force especially in the areas around the Po Valley in Northern Italy.

Domestic rugby in Italy has a tiered system similar to most European sports competitions. However, right at the top of the structure are two teams called Treviso and Zebre, which compete in the United Rugby Championship (URC) alongside teams from Scotland, Ireland, Wales and South Africa. This is a closed competition without relegation and provides the two clubs with the stability to invest, grow and develop.

The Italian rugby pyramid starts with a league called the Pro-10, currently comprised of eight teams from the north and two from Rome. This top division has had many guises over the years and has previously been known as the Top-12, Eccelenza and Super 10. 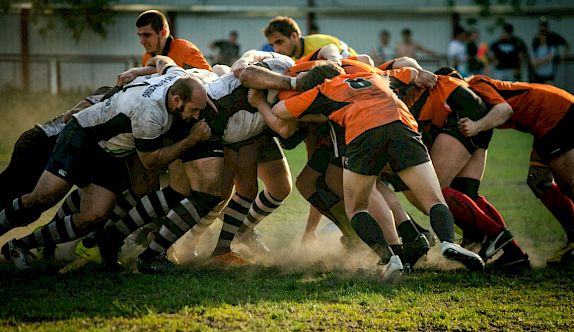 The most successful top tier club is Amatori Milano with 18 titles, though most of their titles came in the 1920-1940s, another 4 were won in the 1990s; however, they now compete in the third tier, Serie B.

The second most successful team is Benetton Treviso who have now ascended to the URC, but who had won 10 championships between 1997-2010, prompting their promotion and have 15 in total.

Of the current teams in the Top-10, Petrarca Padova and Rovigo have 13 titles each with Rovigo beating Petrarca in the 2021 final 23-20.

From the Top-10, one team is currently relegated to the next tier, Serie A. This is a regionalised tier with 3 divisions known as ‘Girone A-B-C’, with teams largely from the North-West of Italy in Girone A, the North-East in Girone B, and the rest of Italy in the third division, Girone C. In Girone A there is also a team from Alghero, Sardinia, and in Girone C is a team from Catania, Sicily.

The top team in each Girone plus the winner of a playoff between the second- best teams then play each other for promotion. At the other end, 3 teams go down and the second-worst teams also play each other in a relegation playoff, the loser gets relegated.

It’s worth knowing that team’s ‘Cadetta’, essentially the second XV, are also admitted to the league pyramid and Petrarca Padova Cadetta, play in Serie A, just one tier below the first XV.

Click below to learn more about rugby in Italy