As Hockey continues to devleop in Italy, we talked to former National Team Coach Enzo Corso about the history and future of Hockey in Italy

Hockey24 is the five-year strategy being used to promote and develop Field Hockey by the International Hockey Federation. Its goals are to increase participation as well as to educate, inspire and improve hockey infrastructure across the globe.

One country leading the development of hockey is Italy. The country’s men’s and women’s teams rank competitively on the international stage and are looking to take the next step. On the domestic scene, better facilities and more players are leading to competitive hockey leagues and, as a result, an ideal destination for a hockey tour.

From our Italian offices, who better to tell you about the Italian hockey scene than Enzo Corso, a former Italian National Team Coach and current president of Hockey Roma. We caught up with him this weekend to ask him all about Hockey in Italy.

Enzo, can you introduce yourself and describe your experiences in hockey?

“I started playing in a school at the age of 14 as other friends of mine were already practicing, then I moved on to play at my club in Rome until I reached Serie A and national selection. After my career as a player I started coaching the Italian men's national team, through the 90s and for many years. Over the past 25 years I have held various management roles both nationally and regionally and I am still the president of the Rome Hockey Club.”

Any particular memories that you can mention?

“As a coach of the Italian national team I played 3 European championships, but in particular in 1991 the men's team had very competitive players and we went to play for the Olympic qualification in New Zealand, where we placed fifth, drawing against the kiwis in a full stadium with an incredible atmosphere.”

Can you briefly tell us the history of hockey in Italy?

“The first games started in the time of Mussolini in the 30s in Genoa with a club in which several British immigrants were present. Subsequently, the game spread to various parts of Italy, especially in the North and in Rome. Then following the Second World War the championships stopped, before resuming with even more enthusiasm and vigour. In the following decades it was played more and more on grass pitches across various Italian regions.

The peak was in the early 90s, later, probably due to the scarce availability of synthetic pitches, the competitiveness of Italian hockey decreased. The present situation sees an association made up of approximately 100 clubs and 6000 players with the women's team ranked in the top 15 worldwide and the men's team, which is regaining competitiveness, positioning itself around 25th in the ranking, but aiming to return to the top 20.” 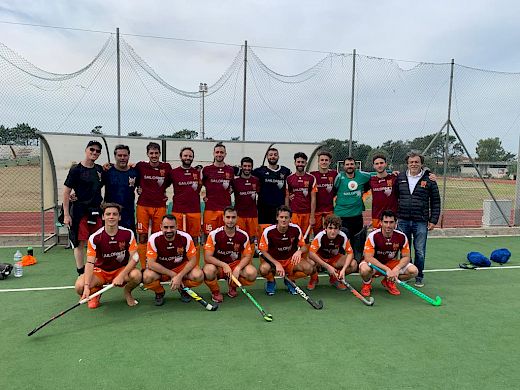 Where is hockey played most and what influences are there from foreign coaches and players?

“The main regions of Italian hockey are in the North: Piedmont, Lombardy, Veneto, Emilia Romagna and Trentino, in the Centre: Tuscany and Lazio, the Islands: Sardinia and Sicily, while the South has only a few clubs.

The outdoor season starts in September and runs until November, and then resumes from March to June, in the months of December, January and February the indoor championship takes place. In the Serie A championship there are 3 foreign players, the largest number, both in men and women, come from Argentina. We also have players from Northern Europe studying through the Erasmus program as well as players from Pakistan.”

What do you think are the determining factors for the future development of Italian hockey?

“Considering the limited number of players compared to more developed countries, I believe that qualitative work is essential. Many clubs have invested in foreign coaches, especially Argentines, and it will also be important to increase the number of matches at an international level and compete with teams from developed countries, trying to field well-prepared regional or national teams.”

Tell us about the Rome Hockey Club where you hold the position of president.

“The club was founded at the end of the 60's and has numerous male and female teams starting from under 10 up to Serie A. We have some foreign players, especially Argentines and Dutch, but male and female hockey players from all over the world want to come and play in Rome. Hockey Club Roma boasts a number of national titles and is one of the most prestigious clubs in Italy.”

What are the main reasons for a foreign team to take a hockey tour in Italy?

“Although the players and clubs are not numerous, the strongest clubs are focused on high quality hockey and have recruited foreign coaches. If necessary, all teams can then be suitably reinforced with players from other teams, ensuring a valid test for a team on tour.

There are also various international tournaments held in Italy in which you can face teams from across Europe. These are held in incredible, historic cities such as Rome but also in a variety of locations across the country, such as by the sea, or at lakeside or mountain resorts. Youth, adult or veteran teams can have a great experience playing matches and training at very friendly and passionate clubs and visiting renowned tourist spots around the world.”

To find out more about how your school or club can play Hockey in Italy, visit https://www.energy-travel.com/sports-tours/hockey/ or call 0330 001 1146.